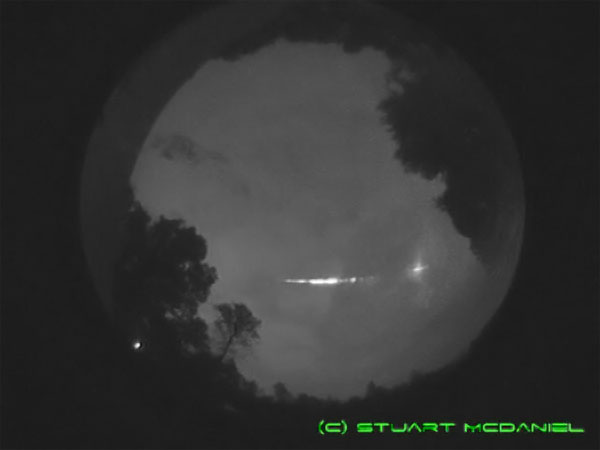 A fireball UFO appeared over North Carolina at approximately 10:00 pm on Wednesday, August 29.

But Ashvegas.com, a website covering local news for the North Carolina city of Asheville, reports that a fireball was above that city “at about 10:48 p.m.” on that night. The site also reports that this fireball “was spotted in a five-state area including North Carolina, South Carolina, Ohio, Kentucky and Virginia, with most spottings seemingly clustered around Asheville, Charlotte and Greensboro.”

With a range of sighting reports spanning approximately an hour, it is plausible that more than one fireball UFO appeared in the sky above North Carolina. Although the object or objects were likely meteors or other space debris entering Earth’s atmosphere, a positive identification has not been make.

Meteorite collector Stuart McDaniel is one witness who was able to capture the fireball on video (see below. The still image of this fireball at the top of this post is from McDaniel’s video):

What do you think this fast-moving aerial object was? Leave your comments below, or on the Open Minds Facebook page.