A new documentary claims it will provide evidence that the Mayans had contact with extraterrestrials. 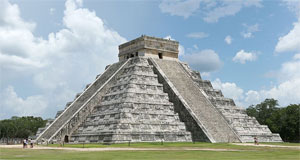