Home / Articles / UFO News / Expanding the search for extraterrestrial life
A team of scientists recently proposed a wider set of criteria for planets that could support life.

Expanding the search for extraterrestrial life 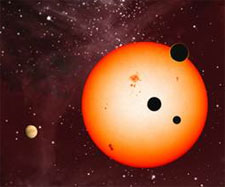 A recent article published by Space Daily stated, “Most scientists think that we are not alone in the universe.” But as Wired recently explained, most of these scientists are focused on Earth-like planets as the best candidates for finding extraterrestrials. Earth-like planets are extremely rare in comparison to the number of total planets in the universe. And with scientists focusing only on these few planets, the extremely narrow search overlooks so many worlds that could be home to extraterrestrial civilizations. That is why a team of scientists recently proposed a wider set of criteria for planets that could support life.

This team of astrobiologists proposed two new planetary rating systems that could help widen the search for extraterrestrial life. Researchers suggest ranking planets on both an Earth Similarity Index (ESI) and a broader Planetary Habitability Index (PHI). Wired explains, “The first index looks at how close a planet is to Earth in mass, temperature, and composition while the second is based on the whether or not it possesses more exotic chemistries, liquids, and energy sources than found on our planet. Alien life could be based on elements other than carbon, require liquids other than water, and gain energy through means other than sunlight.”

Abel Mendez of the University of Puerto Rico in Arecibo is one of the co-authors of the proposed rating system. He explains, “We are trying not to be geocentric, calculating planetary habitability independent of liquid water.”

The team’s proposed rating system was published in the journal Astrobiology on November 21.