Evidence suggests a giant lake of liquid water on Europa 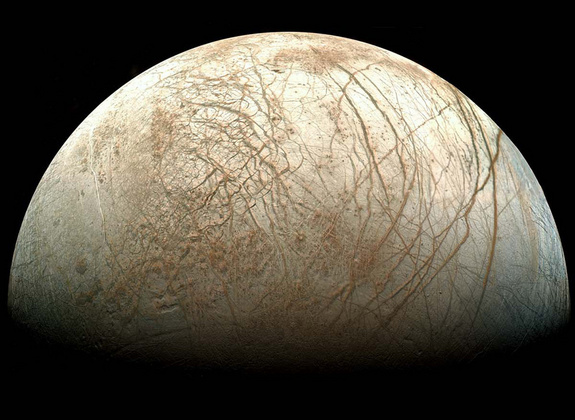 NASA announced today that evidence suggests a giant lake of liquid water could be on Jupiter’s moon Europa.

A team of scientists, led by Britney Schmidt of the University of Texas at Austin, made the announcement today at a NASA press conference. The team recently studied ice formations in Antarctica and Iceland, which, as Space.com explains, provided clues as to how strange formations on Europa known as “chaos terrains” were formed. The study provided researchers with evidence that suggests a lake with “as much water as . . . North America’s Great Lakes combined” is 1.5 miles beneath Europa’s surface. And because there are so many chaos terrains on Europa, scientists say several liquid lakes are likely to exist beneath the moon’s surface.

Liquid water is essential for life as we understand it on Earth, and therefore, any time liquid water is discovered elsewhere in the galaxy, the possibility of finding extraterrestrial life (as we know it) increases.

The team’s research was published in the November 17 issue of the journal Nature.