In a recent interview, Ryder explains the goal of Chasing UFOs.

You may have seen Erin Ryder, who simply goes by Ryder, searching for ghosts, monsters, and other mysterious creatures on SyFy’s Destination Truth. Most recently, she is chasing UFOs on NatGeo’s show titled, well, Chasing UFOs. 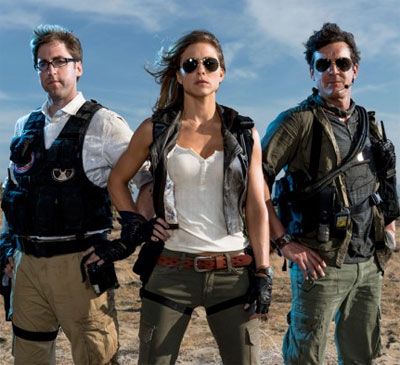 Having met with witnesses and investigated UFOs on the show, Ryder explained in a recent interview with Maxim magazine:

I think there’s a sad stigma to it that if you’ve seen a UFO or if you talk about a UFO, then you wear a tin hat and your windows are covered with aluminum foil, and that’s not really the case. We’ve had Astronauts and Presidents that have seen things, so we just want people to know that it’s okay to not only have these sightings, but to also research it and talk about it.

The Chasing UFOs team met with fans of the show in San Diego recently at the epic entertainment event known as Comic Con. Speaking about the team’s experience there, Ryder said in a recent interview on the web series Spacing Out!, “We were able to bring a lot of kids in . . . we want to inspire young people to be asking these questions and doing this research for themselves.”

Those who choose to research UFOs are well-aware of that unfortunate stigma mentioned by Ryder that is associated with UFOs. And UFO researchers have been less than kind when reviewing Chasing UFOs, ridiculing the show’s propensity for drama. Addressing this, Ryder states, “Whenever you have an opportunity to have a platform like we do with National Geographic, which has been incredible, we want to take advantage of it. And sure, there’s going to be entertainment, and sure, there’s going to be different types of investigations that perhaps people don’t always agree with. But at the same time, what we want to do is our best to get rid of that stigma.”

Although some veteran UFO researchers might hold the unrealistic expectation that all UFO television programs should be geared towards them, and only feature new, Earth-shattering infromation, Ryder explains that Chasing UFOs hits “a new age and a new demographic that can then get interested in [UFOs].”

Watch the full interview with Ryder below: