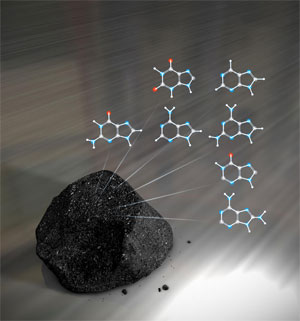 NASA scientists have discovered new evidence showing that DNA components found in meteorites can originate in space. Science Daily explains, “The research gives support to the theory that a ‘kit’ of ready-made parts created in space and delivered to Earth by meteorite and comet impacts assisted the origin of life.”

The research team analyzed samples from 12 different meteorites, and found traces of adenine, guanine, and a variety of molecules known as nucleobase analogs–three of which are rarely found on Earth. Scientists have previously been aware that meteorites can contain DNA elements. But until now, they didn’t know whether or not those elements originated in space. Engadget explains that the presence of these three molecules provides a strong indication that they do originate in space, which “potentially rais[es] new questions about the dawn of life on Earth, and beyond.”

Dr. Michael Callahan of NASA’s Goddard Space Flight Center in Greenbelt, Maryland is the lead author of the paper that details the recent findings. The paper appears in the Proceedings of the National Academy of Sciences of the United States of America.