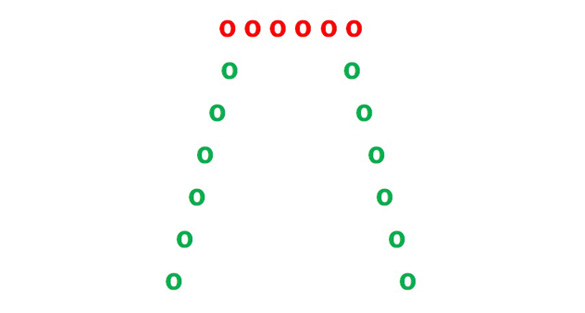 A Texas witness at Dallas reported watching a lighted craft hovering about one mile in altitude that suddenly made a nose dive toward the ground level at an estimated Mach 1 speed, according to July 25, 2014, testimony in Case 58379 from the Mutual UFO Network (MUFON) witness reporting database.

The incident occurred beginning about 11 p.m. on June 13, 2014, as the witness was walking home from a gym workout at Northcliff and Buckner streets and was near Hexter Elementary School. 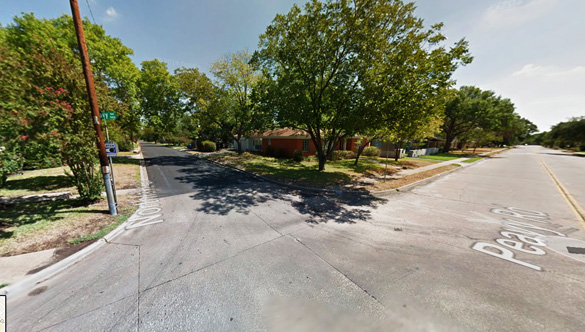 The object was first seen by the witness at Northlake near Peavy streets in Dallas, TX, about one mile in altitude. (Credit: Google)

“The sky was clear, with a full moon and no wind, and there was not the usual city traffic noise,” the witness stated. “As I was walking roundabout back to my house, a lighted craft suddenly appeared high over me at Northlake near Peavy. This occurred within the usual flight path of airplanes originating from south Texas and landing at Love Field; however, I believe that most scheduled Southwest Airline flights had finished for the night.”

The witness first thought the object was a plane, but then it appeared to stop and hover. He stopped and stared at the object.

“The craft was about one mile straight up, with the apparent size of a large corporate jet. I have since studied airplanes flying overhead to confirm this perceived altitude and size.”

“It had extremely bright lights of pure colors, the brightest I have ever seen and the most beautiful red and green. There were no Federal Aviation Administration navigation lights apparent – specifically, green on the starboard, red on the port, flashing strobes on the wingtips, with fore and aft white lights as required below 10,000 feet altitude. Its lights were arranged in a nonsensical pattern as in the attached diagram, with the red lights pulsing every two seconds – this appeared to be the front. The green lights were steady and appeared to be the sides.” 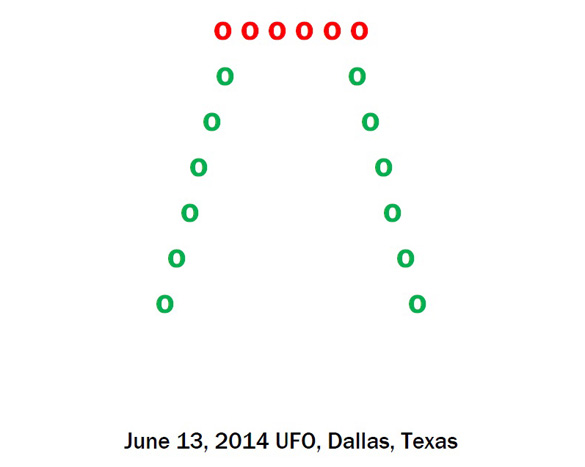 The witness soon realized that the object was not an airplane.

“The body of the craft was not visible as a silhouette against the sky because of the bright lights. It had a clear-cut, garish carnival midway appearance – there was no vagueness at all. I immediately realized that this was not an airplane, so I quickly stepped under a front yard tree on Northlake to hide from its view.”

The witness watched as the object moved about the sky.

“The object circled, did figure-8s, hovered and rocked as I watched from between the leaves. It emitted a very faint but perceptible whirring sound from high up, similar to an electric motor brush. Here, I had both eye and ear confirmation of a materially structured, mechanical craft, and of its apparent vertical distance above.”

The witness feared that he would be seen by the object.

“The object appeared to be methodically searching the ground, so I remained cowing against the tree trunk and became a certified tree-hugger. To add to my problems, the front yard’s motion detector light turned on. This weirdness went on for the longest three minutes, and I began to wonder how it would play out.”

The object then suddenly took a nose dive toward the ground level.

“Suddenly, without any warning, the object streaked at a downward angle, around 45-degrees, eastward toward the Lochwood Mall area. It went from directly overhead to behind the horizon tree line, traveling about a one-mile distance, at one constant and terrific speed. Seeing this ‘side of the triangle’ reinforced my directly vertical, optical and audio estimate as one mile. There was no observable acceleration against inertia or deceleration against momentum. The entire process was reminiscent of the image of a flashlight beam shined against a wall, whereby the flashlight is steadily swept across and the spotlight moves swiftly in response. There was no sound at all during the dive – any whoosh, sonic boom, crash or explosion – anything!” 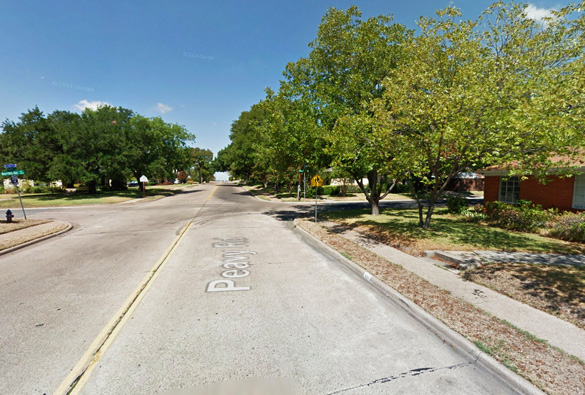 The witness was walking near Northlake and Peavy streets in Dallas, TX, pictured, when the object was first seen – just minutes before it appeared to take a nose dive to the ground level at an estimated speed of Mach 1. (Credit: Google)

The witness used two methods to estimate the object’s speed.

“First, my daughter and I have attended the Fort Worth Alliance air show annually for about 20 years. There are always jet interceptor fly-bys at Mach 1, whereby the sound shock wave is visible forming off the fuselage. The June 13 object simply appeared to be diving that fast and that is what I settled on. Second, it took about five seconds for the craft to go from directly overhead, then down to the tree line, a dive distance of one mile. One mile times five seconds works out to 720 mph, or about Mach 1. The contrast between the three-minute hovering and the five-second dive was astounding! The circling and wobbling object appeared to be silly, jerky, and almost Warner Brothers cartoonish with the super bright garish lights – the reds pulsing on and off, and the greens glowing steady.”

The witness has personally ruled out drones and other man-made aircraft and is hoping for an explanation.

Texas MUFON is investigating. Texas has a current UFO Alert Rating of 3 with a high number of recent reports nationally. Texas had 38 UFO reports in June 2014 – the 2nd highest reporting state – while California had 107 reports as the highest reporting state. The above quotes were edited for clarity. Please report UFO activity to MUFON.com.