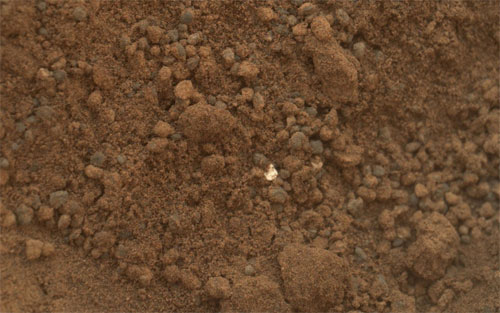 A few weeks ago, NASA’s Mars Science Laboratory Curiosity scooped its first sample of Martian soil, and in doing so, it discovered a mysterious shiny object. After analysis, scientists concluded that the object was likely a small piece of plastic wire casing from the Rover.

Then, two weeks ago, Curiosity scooped a couple more holes in the Martian soil, revealing another shiny object. This shiny particle is different from the previously discovered object. And as Nancy Atkinson of Universe Today explains, “After some analysis, the MSL science team thinks the shiny particle is just part of the soil on Mars.”

MSL project scientist John Grotziner stated, “As the science team thought about it more and more, the bright object is about the same size as the granules that it’s in and it is not uniformly bright . . . We went back and forth, and the majority of the science team thinks this is indigenous to Mars.”

NASA is still assessing the composition of these recently discovered shiny particles.