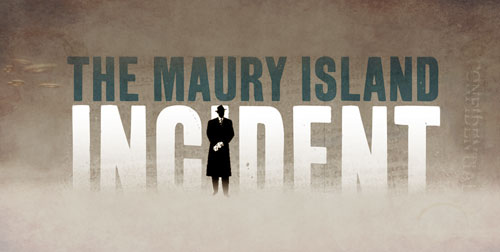 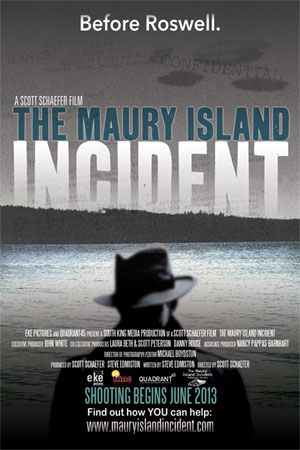 According to the filmmakers:

The short film is based on the true story – taken directly from declassified FBI documents – of Harold Dahl’s June 21, 1947 UFO sighting near Maury Island and the first reported ‘Man In Black’ encounter that happened the next day. An investigation followed that resulted in a mysterious crash of a B-25 carrying “slag” evidence from the encounter, which killed Capt. William Davidson and Lt. Frank Brown (this film will be dedicated to them). This case went all the way up to FBI Executive Director J. Edgar Hoover, who expressed personal interest in it.

The film is now moving into post-production where it will be edited and assembled into the final product. Vashon-Maury Island Beachcomber explains that the makers of The Maury Island Incident intend to enter the estimated twenty-to-fourty-minute film into various film festivals. And they also plan to use the film to pitch the idea of a feature film or TV series based on the event. 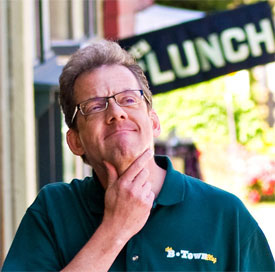 The film’s director and producer is Scott Schaefer, recipient of three national Emmy Awards for his writing work on shows including Bill Nye the Science Guy. Having worked in television for more than twenty-seven years, his directing credits include The Arsenio Hall Show and America’s Funniest People. According to Vashon-Maury Island Beachcomber, Schaefer became interested in ufology “in the early 1990s, when he worked in Hollywood as a field director of a television show called ‘Sightings,’ which delved into the mysteries of flying saucer sightings.” Schaefer explains, “Let’s just say I went into that show as a skeptic, and came out a non-skeptic.”

Now that the film has entered post-production, the filmmakers are hoping to premiere the film by the end of the year.

For more information about The Maury Island Incident movie, visit the film’s website at www.mauryislandincident.com.