Home / Articles / Costa Rica UFO Dossier – Pt 1
A disc-like object appeared clearly on the lower half of the lake. The photo is considered unique and of great scientific value.

When I saw in the last few days a web media story about a recent video and other UFO sightings around Lake Arenal in northern Costa Rica, it brought back memories about a research trip I did in that same area back in 1996. I had attended an International UFO Conference in San José (speakers included retired NASA scientist Dr. Richard Haines, famous TV Mexican journalist Jaime Maussan and Spanish bestselling author Javier Sierra) and on the day after some of us went to Cote Lake in the Arenal region. It was here where Costa Rica’s most famous case occurred in 1971, producing one of the most scientifically interesting UFO images ever taken. Dr. Haines, who had already analyzed the photo with Dr. Jacques Vallee, was really looking forward to the expedition since he had never been in the ground location. Our hosts were the brothers Ricardo and Carlos Vilchez, who are Costa Rica’s best known ufologists, and Edgar Picado, who runs the UFO blog ovnicr.com. What we discovered is that there were many more recent UFO sightings around the Cote and Arenal lakes and this phenomena is still ongoing.

I wrote a complete report on my trip, which I titled “Costa Rica UFO Dossier,” for the popular Japanese newsstand magazine Borderland, where I was writing a monthly column back in the mid-90s. The original text—obviously written in English and then translated to Japanese—has never been published in English, so I am presenting it here as a two-part series with additional images and some minor adjustments. The cases are not new but they are highly interesting and little known (with the exception of the Cote Lake photo which was even used for the cover of the French COMETA Report) outside of Costa Rica. Here then is the first part of my 1996 Borderland Costa Rica UFO Dossier.

On the morning of September 4, 1971, an aircraft of the Costa Rican Geographic Institute was photographing the Arenal region for making maps. The crew of four didn’t recall anything unusual, but then the camera was set to take pictures automatically every 20 seconds or so. It was a special R-M-K 15/23 camera with b/w film ASA 80, with an 8×8 negative printed on Kodak Safety aerial film, type 3665.

One shot taken at 10,000 feet altitude, frame 300, showed mountains around Cote Lake in Guanacaste Province, 25 miles south of Nicaragua. A disc-like object appeared clearly on the lower half of the lake. The photo is considered unique and of great scientific value. Drs. Richard Haines and Jacques Vallee listed a number of reasons why in their first study of Cote, published in the Journal of Scientific Exploration in 1989:

“(1) it was taken by a high-quality professional camera;

(2) the camera was looking down, which implies a maximum distance, hence a maximum size for the object;

(3) the disc was seen against a reasonably uniform dark background of a body of water; and

(4) the image was large, in focus and provided significant detail.” 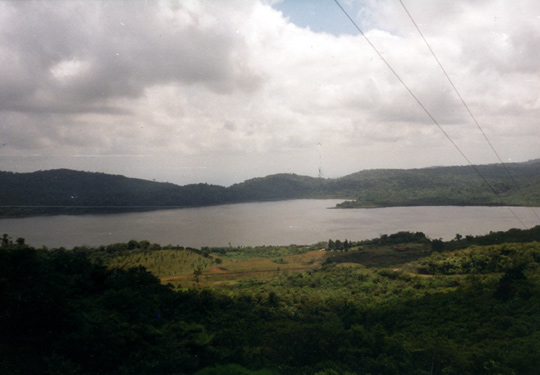 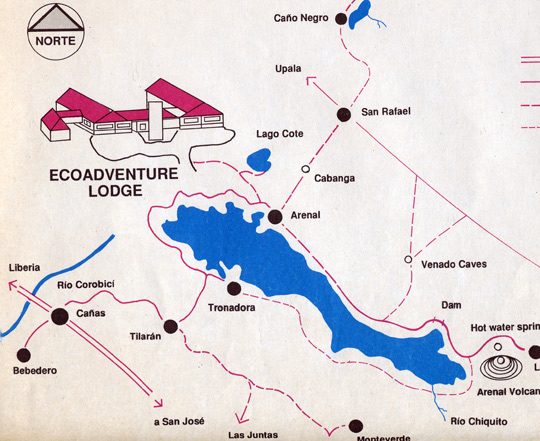 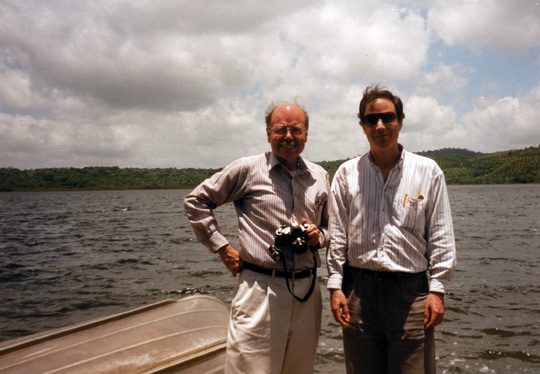 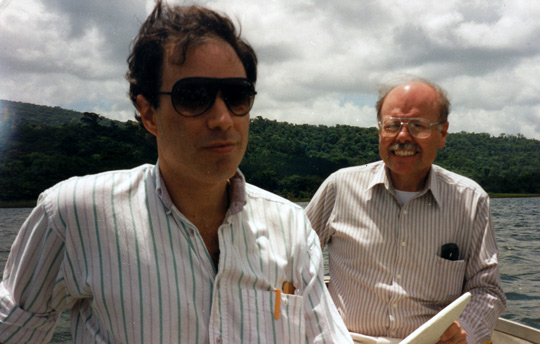 Apparently, the disc was not noticed until 1979, when the Geographic Institute contacted professional photographer and ufologist Ricardo Vilchez, who sent copies of the photo to various international experts. The case is still being analyzed over three decades later. I had the opportunity of visiting Cote Lake last April with the Vilchez brothers, Edgar Picado, and retired NASA scientist Dr. Haines, who published with Vallee two papers on the photo. Knowing the lake’s dimensions and the aircraft altitude, Haines and Vallee calculated the “maximum dimension of the disc” if it was on the surface: “The 4.2 mm length of the image is equivalent to an object 210 m [meters] in length or 683 feet,” they wrote.

A senior Lockheed analyst raised the objection that the disc may be “a pressure mark” on the film, which was disproven when the Geographic Institute loaned the original negative for further analysis. “The image was smooth as glass so it set to rest that argument,” said Dr. Haines. As we visited Costa Rica to attend a UFO Conference in San José, we learned that recent sightings had occurred around the Cote and Arenal lakes. We first stopped at the Eco-Lodge Hotel, located on a hill from where you can see both lakes from different sides.

Don Jose Flaqué, one of the owners and hotel manager, told us he had at least two UFO sightings in the past 5 years. Three weeks before our arrival, Flaqué and several employees and hotel guests had seen around 8 or 9 p.m. a bright light right over a nearby mountain. “It was an intense light like a spotlight which illuminated the mountain underneath,” said Flaqué, “the night was clear and the sighting lasted some 10 minutes, after which the object flew to one cloud and disappeared.”

We also interviewed two other witnesses from the Eco-Lodge staff: chef Leonardo Cabezas and receptionist Alan Venegas, who confirmed the late March 1996 incident. Cabezas mentioned another sighting by a guard and a maid a few days later: “Something emerged from the mountain, flew to Arenal and hovered over a waste dump; it later moved to Arenal Lake and, according to a local farmer, entered the lake.” Cabezas heard the story from the guard, but he didn’t see a UFO that night. We then located a boatman in Cote (also an Eco-Lodge employee) who had seen a very high, isolated and unusual wave in the middle of the lake. Dr. Haines found this detail very interesting, noting that a geological fault crosses it. The fact that UFOs are still been reported in this area 40 years after the Geographical Institute photograph confirms that this indeed is a Central American UFO hot spot.

Eco-Lodge employees point at the spot where they saw the UFO, along with a sketch of what they saw. (image credit: Antonio Huneeus)

Twin brothers Carlos and Ricardo Vilchez Navamuel are Costa Rica’s first and foremost ufologists. Beginning in 1976 as a hobby, the Vilchez brothers soon formed the Costa Rican Institute of Scientific and Exobiological Investigations. They have documented 140 UFO cases in 20 years (that was when I met them back in 1996, surely much more by now). 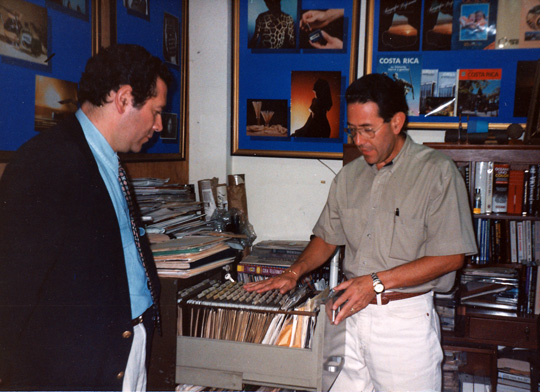 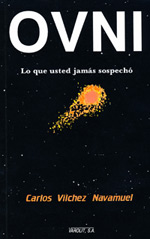 In 1976, they began their investigation of contactee Enrique Castillo Rincón, which continues to this day; in 1979, they located the famous Cote Lake UFO photo; in 1980, they documented the wave involving many police cars. “It was a crucial year for me,” said Ricardo Vilchez, “since we had the opportunity of investigating 32 cases with 70 witnesses in four months!” In 1985, they sponsored an International Congress which gathered in San Jose not only top ufologists like Jacques Vallee, John Keel and the Spanish J.J. Benítez, but also consciousness researchers like Dr. John Lilly and Dr. Andrija Puharich. In 1993, they began to study a multiple-abduction case with so-called gray humanoids involving four generations of women in a humble family. In 1995, it was one of the best Central American radar-visual pilot cases.

Throughout it all, the Vilchez have kept ufology as a parallel activity to their own professional and business careers. “This allows us more objectivity when doing the analysis of a case,” said Carlos Vilchez, who sells real estate and is interested in educational projects with children. Carlos published a book about investment in Costa Rica, as well as a small UFO book. Ricardo is a professional photographer who owns a successful studio and has published several touristic photo books, and a political philosophy study titled Conscious Democracy. 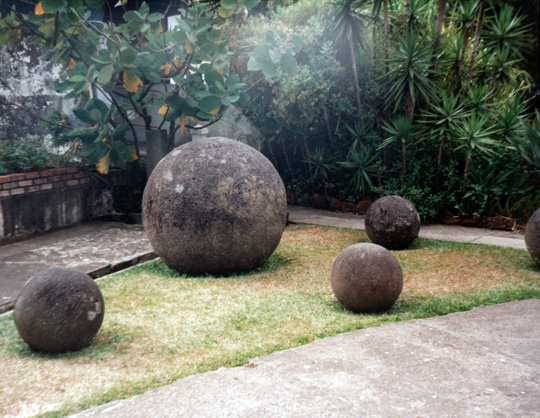 Costa Rica’s most enduring archaeological mystery are the stone spheres found in the southern Pacific area of the Diquis Delta, near Panama. Perfectly round and smooth, they range in size from tennis balls to spheres with a 2.4-meter diameter and 16-ton weight. Most are made of granite and some of limestone.

The stones were discovered in the 1930s as the thick jungles of the Diquis Delta were cleared for banana plantations. No written record from the Spanish conquest mentions them. Unfortunately, hundreds of stones were taken from their original sites for display in the gardens of public buildings and residential houses in San José, where they can be seen today. Thus, a complete study of the stones’ original alignments (many were found in clusters of up to 45 forming circles or triangles) is no longer possible.

Many theories have been proposed linking the spheres to ETs, Atlantis, etc. Archaeologist Ifigenia Quintanilla of the Costa Rican National Museum, whom we met during our visit, discounts such theories. She said the stones were made by the local indians with known tools and materials. Their purpose is still mysterious, but it was probably linked to religious/astronomical rituals and as status symbols. 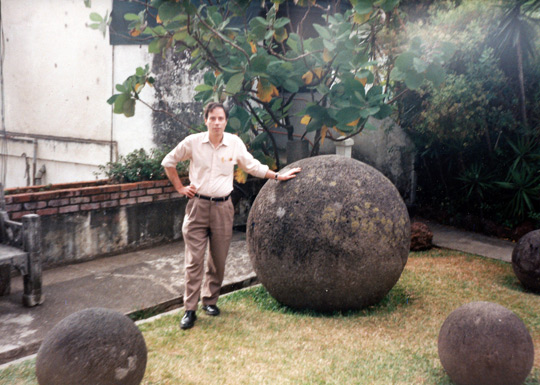 The complete analysis of the Cote Lake UFO photo by Drs. Haines and Vallee published in the Journal of Scientific Exploration can be downloaded here and here. Edgar Picado’s UFO blog in Spanish can be located here.

More information on recent UFO sightings can be found in this recent article from Inside Costa Rica, you can find it here.