A witness captured video of a cigar-shaped UFO hovering above the Manchester town of Denton in England. It is unclear when the event occurred, but the witness uploaded the video to YouTube on July 9, 2011 with the following description: 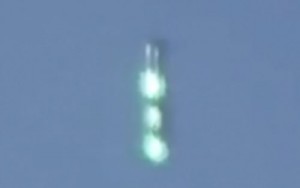 HUGE UFO cigar shaped metallic UFO object caught on camera in Denton, Manchester UK 2011. Object was just visible to the naked eye. Was in the sky for around 40 minutes before raising so high that it could not be seen at all. UFO means unidentified flying object so I’m not saying it was little green men, but still . . . Interesting to watch. The camera is so shaky because it was at full zoom, and knowing how high it appeared in the sky (higher than planes) I’m guessing its size was massive.

Some who viewed the video suggested the UFO might be a solar balloon. The witness even addressed this theory in the description that accompanies a second video (which is simply 51 seconds of footage from the original 1 minute 18 second long video) he uploaded on August 17, 2011. The witness described, “I was sat in my back garden when i noticed this. Some people have mentioned it may be a balloon of some sort, but it was a windy day and it hovered for a while then disappeared.”

It’s unclear why the witness uploaded a second video of the same sighting. Perhaps it was to garner more attention. He did title the second video “Best UFO ever recorded,” after all.

The Huffington Post contacted Marc D’Antonio, the chief photo/video analyst for the Mutual UFO Network, to get his opinion on the UFO video. D’Antonio opined, “I believe it to be a solar balloon. It is of the silver mylar type and everything about its motion, shape and color says that it’s a mylar solar balloon, to me.”

Although a solar balloon is a plausible explanation for this cigar-shaped object, we would love to hear your thoughts. What do you think this UFO is? Share your opinion with us in the comments below, or on our Facebook page.