A slow-moving UFO appeared over the English town of Marsh Green in Wigan, Manchester on the night of Tuesday, October 15. 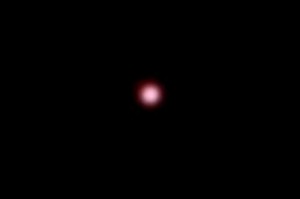 An annonymous man witnessed the UFO. He found the aerial light so peculiar that he decided to record video of it with his cell phone. He sent his video to local news outlet WiganToday, describing, “It was big and orange and moving oddly – it wasn’t a plane or helicopter and it looked too big to be one of those Chinese lantern things. I don’t know what it was. Perhaps it was martians, who knows?”

Although the witness believes the UFO was too large to be a sky lantern, its appearance and behavior in the video strongly resemble those of a sky lantern. Sky lanterns of various shapes, sizes, and colors exist, not to mention homemade versions that can wildly vary in size. This is a possible identification for the object seen and recorded by the anonymous witness. But because the video provides little detail and no reference points, a positive identification cannot be made, leaving the object unidentified.

According to WiganToday, “There have been numerous sightings of strange objects over the skies of Wigan during the last decade–some easily explained, some not so.”