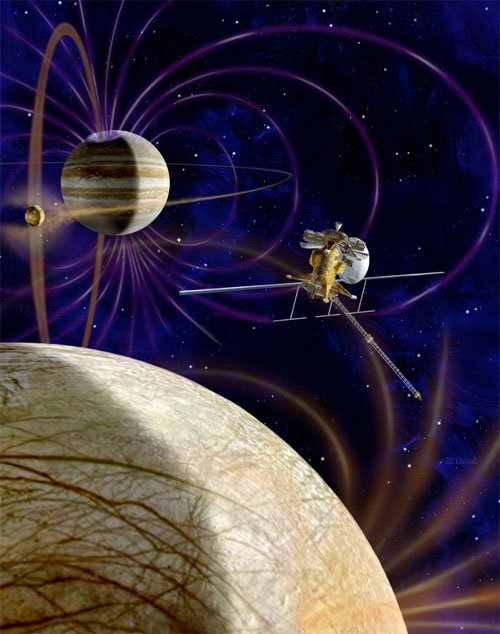 Astrobiologists support missions to search for life on Europa

Some scientists believe Jupiter’s moon Europa is the best place to look for alien life in our solar system.

Planetary scientist and astrobiologist Kevin Peter Hand recently explained to CNN that Europa “provides an incredibly compelling place to go to search for a second, independent origin of life and it’s a place where we might find lifeforms that are alive now, today.” But as Wired explains, “big dollar signs” have prevented the necessary exploratory missions to this moon to search for life. NASA had plans to launch a large spacecraft called the Jupiter Europa Orbiter (JEO), but the craft’s hefty price tag ($4.7 billion is hefty, right?) grounded the project indefinitely.

Refusing to accept Europa exploration as a lost cause, astrobiologist Pabulo Henrique Rampelotto of Brazil’s Federal University of Pampa formulated alternative mission concepts for sending craft to Europa for less money. As outlined in the journal Astrobiology, Rampelotto favors sending three small spacecraft, rather than one large spacecraft. Wired explains that this plan, which would include two orbiters and a probe carrying a surface impactor, “could spread out both the cost and the risk while hitting all of JEO’s science goals, and then some.”

According to Wired, Bob Pappalardo, a scientist helping NASA develop future Moon missions, said Rampelotto’s proposal is logical for “tight budgetary times.” But he points out that “saving money by splitting up a big mission into smaller ones brings about another issue: fear of commitment.”

Although the likelihood of any Europa mission happening in the near future is slim, Rampelotto shares the opinion of many scientists that Europa is “the prime candidate in the search for life in our solar system.”