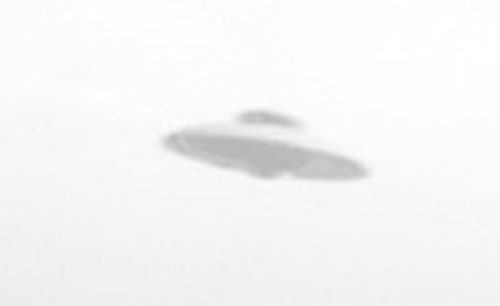 A Major in the Indian army photographed a UFO, according to his wife.

Divya Sebastian claims that her husband, Major Sebastian Zachariah, snapped the photo of the UFO while the couple visited a beach in Kannur, located in the Indian state of Kerala. She explained the UFO photo to the New Indian Express: 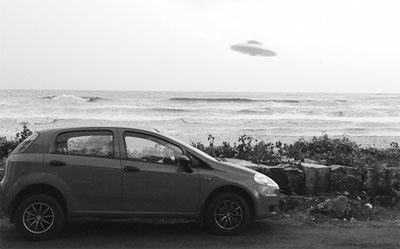 My husband had a new mobile (HTC-1) and he was checking the features by clicking photos randomly. It was around 4.30-5 pm and suddenly he screamed saying that he got a UFO image. We couldn’t believe it first and thought he was playing a prank.

The photo shows the couple’s parked car and a classic flying saucer shaped object hovering over the ocean. Neither of the two actually saw the object in the sky. The UFO was only discovered when Divya’s husband reviewed his photos. The couple reportedly searched the Internet for any reports of a UFO in the area. And according to the New Indian Express, the couple contacted their cell phone’s customer service center to ask if any UFO images might have been on the phone when they bought it. Divya describes, “We were told that no UFO images were stored on the mobile library and it is then we were forced to believe that we might have captured something special. We have seen UFOs in movies, but well this one has literally floored us.”

According to the New Indian Express, Professor Jayant Murthy of the Indian Institute of Astrophysics in Bangalore does not believe the couple photographed an alien spacecraft. He explained, “Due to reflections of some optics there could have been illusions. People sometimes experience camera illusions and they are not UFOs. These are nothing real.” But due to the defined craft in the photo, it is unlikely that the professor actually viewed the photo in question before forming his opinion.

The couple gave their UFO photo to the media, but Divya claims, “We do not want to get into any publicity nor want to debate over whether UFOs exist or not. We are just sharing what we saw. My husband is a serving officer and he can’t interact with the media, either.” 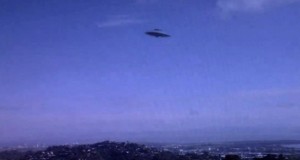 Unfortunately, this UFO is most likely the result of hoax, as it is identical to a UFO included in several photo applications available for smartphones like the HTC One. This phone runs the Android operating system, and several photo applications available for Android phones allow users to insert UFOs into new or existing photos. Some of these applications are UFO photo prank, UFO Camera, UFO Photo Bomb, and Camera360. The craft in this recent UFO photo from India is identical to the UFO in a recent photo from California. The photographer who took the California photo admitted to having the Camera360 app on his phone, but denied that he intentionally hoaxed the photo.

As for this recent UFO photo from India, it is unclear if Divya is complicit in a hoax with her husband, or if she is simply a victim of a prank, as she initially suspected.