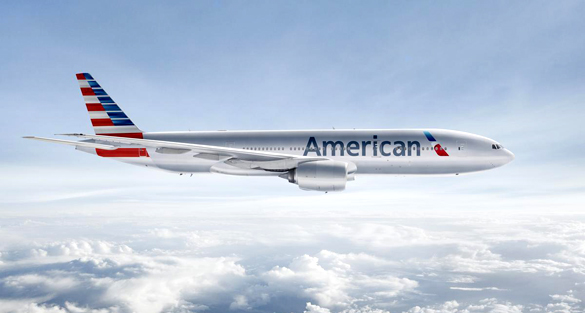 A ham radio user caught what appears to be a UFO report near Nephi, Utah while monitoring airline communications between commercial airliners and the control tower. The conversation was not recorded. However, UFO researchers were able to get a copy of the transmission from the Federal Aviation Administration (FAA) in response to a Freedom of Information Act (FOIA) request. 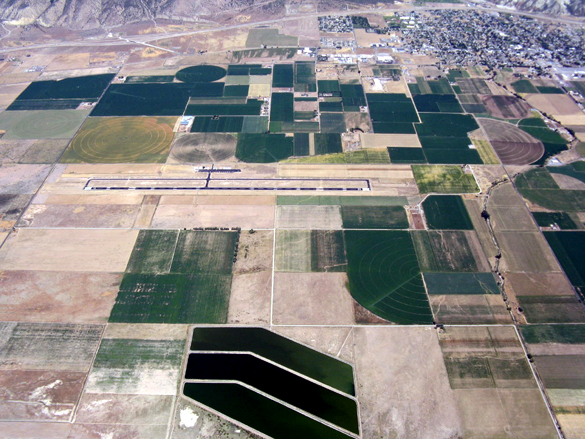 Nephi Municipal Airport from the air. The town can be seen in the upper right. (Credit: Arizona Soaring Association/http://www.asa-soaring.org/)

Pat Daniels, a paranormal radio host and ham radio hobbyist, was monitoring airline communications on January 14 at around 12:12 am when he heard exactly what he was looking for, a UFO report. According to the website UFOs Northwest, Daniels claims: 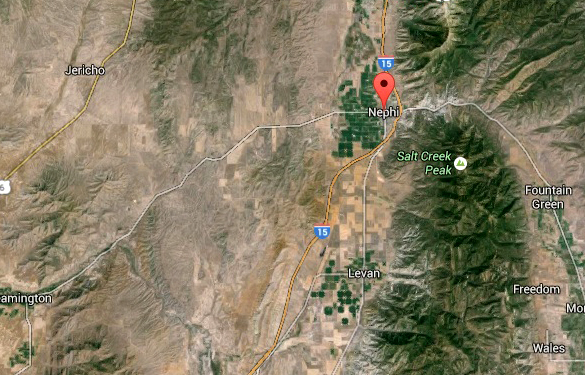 Daniels reported the event to the Utah chapter of the Mutual UFO Network (MUFON). The Utah MUFON state director at the time was Erica Lukes, who says her team, with the help of William Puckett from UFOs Northwest, began investigating.

First, they were able to determine the flight was American Airlines flight number 434, which was traveling from San Francisco, California to Philadelphia, Pennsylvania.

In order to confirm the report, the group filed the FOIA request to the FAA and reviewed audio files from the Air Traffic Control website. Lukes says they had to listen through hours of audio communications, but they finally found some of what they were looking for. Although they did find some communication from the flight, the UFO report was missing.

Fortunately, the FAA came through. Six weeks after submitting their FOIA request, the FAA sent them what they were looking for, radar returns, voice tapes and tower logs. The audio file included what they believe is an excerpt of the UFO sighting.

This is a transcript of what can be heard in the audio provided by the FAA:

American 434: You wouldn’t happen to know what this bright orange square we are flying over is, would ya?

Tower: Uhhhh, no. That’s a good question. I am not sure. Is it off to your right side?

American 434: It is like directly off of our nose right now. It is right below us. We have been watching it for awhile now. I don’t know what it is. It is a perfect square and it is bright orange. What town are we next to? This town right off of our 2 o’clock (indistinguishable word).

As noted by UFOs Northwest, the audio only states that the object was large and orange, but not the parts about the object being a mile wide, that is was keeping pace with the aircraft or that it was not on radar. In fact, the audio that was provided could indicate something on the ground. Still, it confirmed that Daniels did hear pilots reporting something that was large, bight and orange and baffling to the crew.

Under further analysis, the investigators believe that some of the audio was redacted. Daniels feels this could be because the American Airlines crew did not identify themselves prior to their earlier transmissions, so the FAA would not have included it in their request for communications for flight 434.

Next, the group tackled the FAA’s radar data. Puckett of UFOs Northwest is familiar with radar. He has a master’s degree in atmospheric science, and worked as a meteorologist for a few years before a long career working for the Environmental Protection Agency. He has analyzed radar data for UFO cases before.

According to the website, while analyzing the radar data for 12:08 to 12:15 am, he found several radar hits south of Nephi, but close to the path of flight 434.

Puckett writes, “The animation shows 1 to 3 returns for each revolution of the radar. There are a few rotations where no returns are detected. This is strange.”

“One wonders if the object was moving erratically and perhaps was rotating exposing more or less radar cross sectional area resulting in no detection or a different number of returns? The object could have been large considering this type of ‘radar signature?’,” Puckett added. 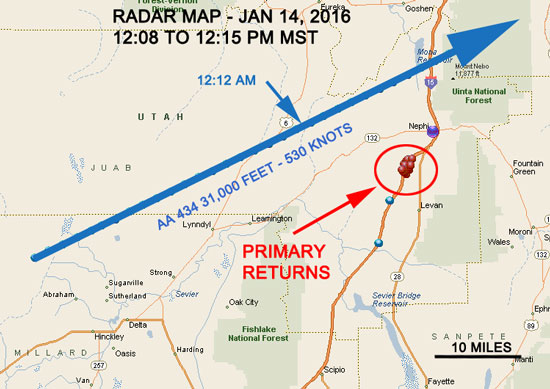 Radar hits in relation to the flight path. The times in this graphic mistakenly show pm, instead of am. (Credit: UFOs Northwest)

You can read his detailed analysis of the radar data at UFOs Northwest. 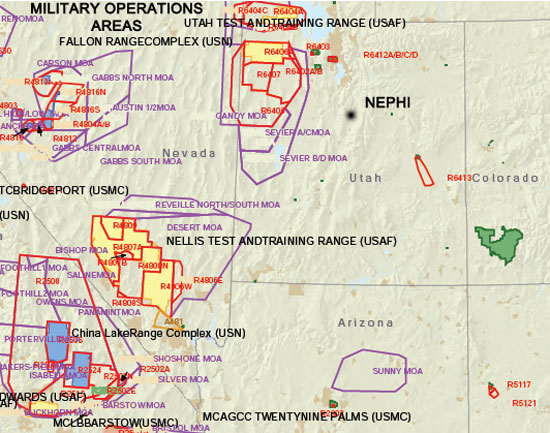 The case is still under investigation. At least one investigator has suggested the lights could have been a local power plant, but Puckett and Lukes feel the pilots would have been used to seeing the plant, so they would not have found it mysterious.

Lukes also spoke with local residents who say UFOs are often spotted in the area.

You can listen to Erica Lukes talking about this case and other Utah mysterious on this recent episode of Open Minds UFO Radio.