Home / Articles / UFO News / Alien cosmonaut photographed in Japan?
In 1975, a man named Giichi Shiota claimed to have encountered what he believed to be alien cosmonauts. 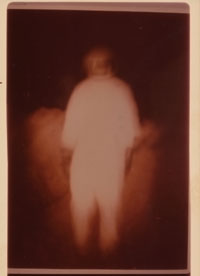 On the night of March 24th, 1975, Mr. Shiota was at a landfill in Kawanoe when he came upon a luminous figure suspended in mid-air. He perceived the figure to be more than 300 feet in front of him, and hovering 6 ½ feet off the ground. He wasn’t frightened, but he did develop a headache – something that had happened in the past when Mr. Shiota encountered a UFO.

Amazed by what he had seen, Mr. Shiota was determined to photograph the strange figure. He returned to the same area, night after night, with three cameras in hand, just waiting for the opportunity. On the night of March 31st, he experienced that same headache, then suddenly, he saw a blue and white electrical disturbance approximately 300 feet away. After watching it for several minutes, he saw a 5 ½ foot tall human-like figure appear in the air. It slowly descended until it was a foot off the ground, and it stayed at that height as it glided towards Mr. Shiota. He began snapping photos as quickly as possible with his Nikomat EL camera and 200mm Nikkor lens. When the object was approximately 160 feet away, it made an abrupt right turn, moved at a quick pace for 30 feet, then vanished.

The entire event lasted no more than one minute.