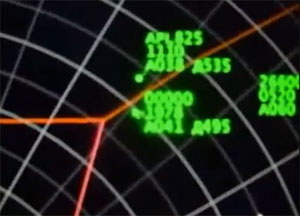 Air traffic controllers at Yakutsk Airport in Siberia, Russia detected a UFO on radar, and captured video of their radar screen to prove it. Controllers estimated the speed of the unknown object to be 6,000 miles-per-hour, and flying at an altitude of 64,895 feet above sea level, according to The Sun.

Nick Pope, who investigated UFOs for Britain’s Ministry of Defence, told The Sun, “Given that the UFO was tracked on radar, we’ve got some hard evidence that something extraordinary happened.” Even more extraordinary is the claim by air traffic controllers that a female-sounding alien spoke to them in a cat-like language when they tried to communicate with the unknown object. According to The Sun, one of the controllers admitted, “I kept hearing some female voice, as if a woman was saying miaow-miaow all the time.”

Experts say the UFO could have been a secret missile test, but others have suggested the video is fake. The date of the incident is unknown, but some suggest the incident may have taken place in 2009.